Fully Customize Your School Result Sheet as You Want 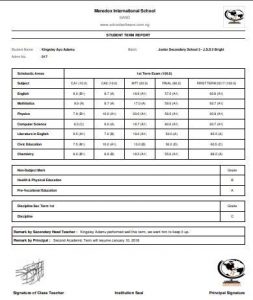 How would you want to manage your School student’s results? Get it all here

As we stated, School Software Pro start with you from when student was given admission, manage everything about the student(s) records including all the results for all the subjects/ courses/ classes till graduation stage and generate student transcript.

No matter the type of your school (Primary, Secondary, Group of Schools, Polytechnic or University) School Software Pro, a school result management software /system helps you to manage your students result.

Students have access to all their published results, no matter the level/ class or year

SOME OF THE TYPES OF RESULTS SSP WILL HELP YOU GENERATE ARE:

You have all the freedom to have the result the way you would want it.

School Software Pro Multi or Group of schools plugin is recommended for management of Group of Institutions who want to control more than one school or college from a single application.

Simple Technology to Teach, Learn, Examine and Manage school(s) from admission to graduation of students with exceptional support.

As long as you want the best for your school, School Software Pro have an affordable budget for you. Big or Small schools.